Another year is coming to a close and still we receive interesting material almost on a daily basis. We are truly grateful to those of you who responded to the plea in our Summer 2015 Newsletter and shared with us their memories. Many thanks - Phil, Henry, and Glyn - not forgetting a "Canadian Baker".

A New Look? Margaret and James are currently engaged on producing proposals for a completely new look to the title pages of both Websites.

New Additions to the Websites - The new items added to the websites since the last issue can be accessed as usual by clicking on the blue "links". If you are able to add to these records, we would be pleased to hear from you. The new material includes:

Stopped end steam tubes in a brick oven in canada

Our biggest "virtual book" to date - "Baker Perkins at War" is close to completion after a long period of technical problems. Only a relatively few links remain to be inserted. It will be interesting to hear what people think of it, particularly as we are sure that it is not what was expected. We remind readers that the first aim of a "virtual book" is to act as a sophisticated index, opening up all parts of our two websites to exploration. We hope that we have met this objective satisfactorily.  Please click HERE to access the contents.

We have experienced many computer problems in the last 3 months and have lost some important pieces of information. However, one particularly vital piece was recovered - a Word format copy of our book - "Growing our own Wood" - a rapidly diminishing stock of which is currently only available in soft-back format. We are investigating the possibility of converting the volume into "virtual book" format.

You will have seen the relative ease with which new information can be added to an existing "virtual book" so we would appreciate your help in providing more stories to add our growing list of subjects covered.

Just to prove the point, a new input from Henry Kafeman has been added to our existing "virtual book - "VB02 - Baker Perkins in the Wider Community"

Our coverage of BP Inc's activities in WW2 included details of some of the ships and landing craft made in conjunction with the Defoe Shipbuilding Co. in Saginaw. We have learned that Saginaw's output also included some of the landing craft used by the allies during the Normandy landings. Does any ex-Saginaw employee have evidence of what the shop floor looked like during WW2? 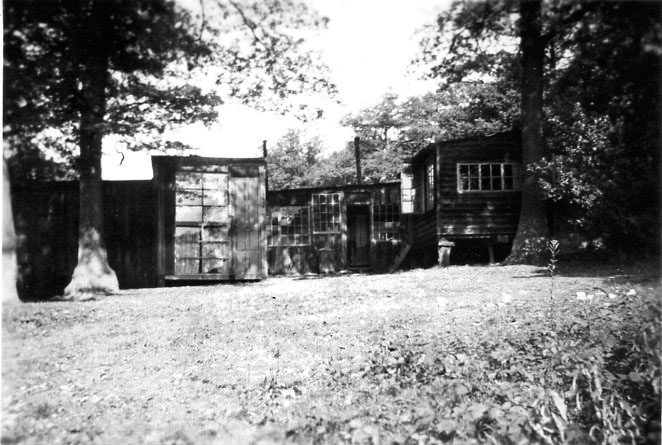 We were contacted recently by a researcher seeking information about a "sanctuary" built at the end of WW1 by William King Baker and used to house convalescent soldiers and their families. (See also - Baker Perkins at War)

In our last issue we reported the rumour of a secret Police Telephone Relay Station said to be sited in the Baker Perkins' multi-storey office block. We have heard from Glyn Bartlett who was a trainee Maintenance Electrician in the 1960s and spent some time tending the equipment therein. He gives us his opinion on this and another rumoured installation - a Nuclear Fall-out Shelter under the Strong Room - (Click HERE). He also gives a hilarious account of the task of maintaining the very real Air Raid Siren on top of the lift house.

We hear that a new Museum is being developed in Trenton, Canada (the birthplace of Joseph Baker). The local population has recognised the importance of one of their "sons" and are creating a relevant display. Gabrielle has been in contact and has donated some relevant paperwork together with a replica of Joseph's original flour sifter. We await some photographs.

A wonderfully evocative description - warts and all - by Phil Harnett, of what it is like to be in the front line when developing a new market abroad. Including a salutary lesson that proves -"It ain't what you say; it's the way that you say it".

[EDITOR'S NOTE: I make no apology for including the text of Phil's story in full. We set out to show what it was really like to work in industry. In my opinion, Phil's story highlights one of the most important things which an expatriate has to come to terms with from day one - how to communicate accurately in the local language Perhaps Phil could be persuaded to tell us more about how he coped with becoming proficient in Chinese - DICK]

Most of you will recall Baker Perkins' involvement in the foundry industry which came to an end in Autumn 1984 with a management buy-out by Arthur Ferns, its manager since 1980. (See also - "The History of Baker Perkins in the Foundry Industry"). We have received some excellent photographs of equipment from that time, including this one - very moody, very atmospheric. Does anyone recognise this man? Sadly, however, while I am able to differentiate between biscuit dough and foundry sand that is about as far as I can go. Is there someone out there who could identify these pieces of equipment, please? (See also HERE).

AND NOW FOR SOMETHING COMPLETELY DIFFERENT

It seems very appropriate to use an abiding image from WW1 to exhort our readers to make one final effort to help us bring this project to a logical conclusion. So can we make one last push, please?

Time and time again whilst working on this project we have heard that Baker Perkins was "unique", "had a family feeling" and "was different from other companies". Before we finally draw the curtains on this project, we would like to find a method of expressing this "difference" in a way that explodes the myths, leaving a coherent and realistic memory for future generations of what the company meant to the majority of its employees. It is surely obvious that not every ex-employee thinks fondly of their time at Baker Perkins and "couldn't wait to get to work each morning" - but many still hold to this view.  It is interesting to note that more than 160 employees, ex-employees, spouses and partners turned out for the 6th BPHS Reunion, some 23 years after the company closed its main factory in Westfield Road. How many other companies could claim this degree of apparent loyalty? It would be fascinating to hear from anyone who joined Baker Perkins from a similar company who is able to compare the management styles of the two organisations.

May we then renew our plea for you to take the time to share your memories with us - both good and those less memorable. We are seeking neither long epistles in purple prose, nor vituperative diatribes aimed at getting long-festering grudges off one's chest - although, of course, such memories are vital to arriving at a balanced view. In this, we decided at the outset of this project, that our timeline would end at 1987, the time of the merger with APV. This development must have coloured most employees' perception of Baker Perkins as a place to work and reminiscences describing how the news of the merger affected employees' everyday activities would be welcomed. Any assessment of the actual impact of the merger will have to await the setting up of another project led by another team if the need for a history of the APV Baker years is considered worthwhile. Of course, if anyone has a burning wish to articulate their view as to what sort of company Baker Perkins might have been had the merger not taken place - we would like to hear from you.

We suggested in our last Newsletter that this project has a finite time to run and we must start planning for the day when we have to say -"That's that" so we would welcome your help in completing this final phase of our work. If you have never before contributed but have something to say, please do so now.
.
Come on all you ex-colleagues - aren't you proud that you were part of a company that changed the World a little bit? Let us see your "Footprints in the sand".

Should you be suffering from "Blank Sheet of Paper Syndrome" and need a bit of a prompt, you might find the following extracts from our websites useful:

Best wishes to you all for Christmas and the New Year.